A Butterfly fit for a Queen ?

As you may know I live in a small village on the edge of Exmoor. To celebrate the Queen's 90th birthday it was decided to put on an art exhibition inspired by Her Majesty. I'm not really into portraits or landscapes but I suddenly had a brainwave.
It was mainly thanks to Women's' Hour, a regular companion, that I found out about an amazing lady called Maria Merian. She was an entomologist and artist who travelled from her home in Germany to Suriname in 1699, whilst in South America she studied the native plants and animals. She was one of the first scientists to understand the transformation of caterpillar into butterfly. 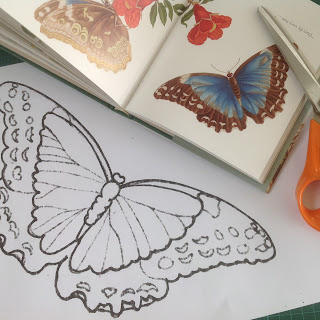 Her work was later published in a volume called Metamorphosis Insectorum Suriname. Her original drawings were acquired by George the 3rd and now form part of the Royal Collection. They are currently on display at The Queen's Gallery, Buckingham Palace. So there's my Royal connection.
I choose the Blue Morpho, using Maria's drawing as inspiration, the first stage was to draw a simplified pattern. 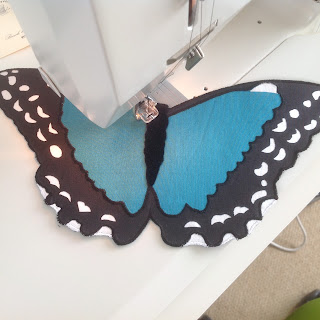 This was then cut out in layers of silk and the raw edges bound with satin stitch. I layered black and white silk and cut through the layers to create the markings on the wing edge. 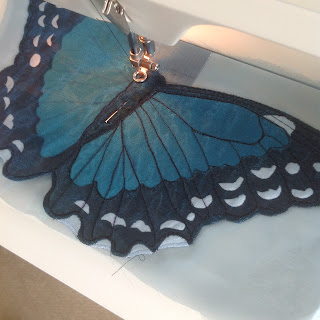 Next the whole butterfly was covered in a layer of shot organza and the veins on the wings were outlined in free motion embroidery. 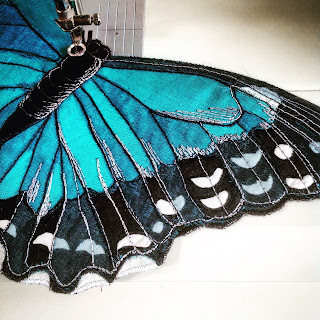 I then cut sections away and stitched in a contrasting colour. 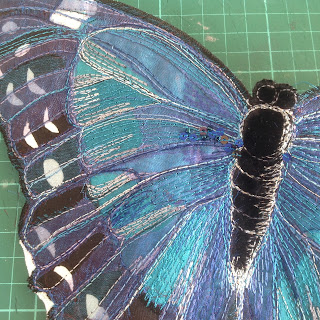 I added another layer of organza to achieve real depth in the wings, with lots of free motion embroidery in a variety of coloured threads. 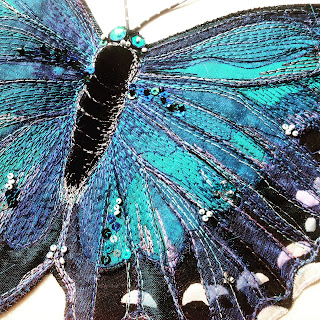 The final stage was hand beading to represent the way light reflects on the iridescent wings. 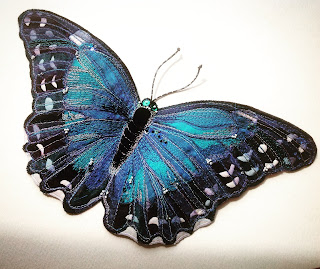 And here we have the finished piece all ready to show over the weekend. I hope Her Majesty approves!
Posted by Heather Everitt at 08:19 No comments: 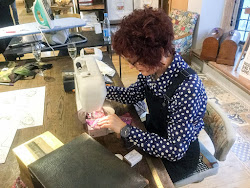